6 Films That Will Inspire You To Travel the World

The films on our list all share a powerful central theme: the transformative nature of travel, and self-discovery through the experience of different places and cultures.

Many of them also capture the essence of the life-altering impact made by making friends across distances and cultures, and showcase the natural beauty, cityscapes, and landscapes of the world. Whenever we watch these films, we’re left dreaming of the possibilities.

If you’re a cinephile who loves to travel, this list is for you. Who’s making popcorn?

Truly one of the most inspiring films about travel ever, Motorcycle Diaries tells the story of a young Ernesto “Che” Guevara and his companion Alberto Granado, who set out together on a 9-month voyage around South America via motorcycle. Journeying from Argentina to Peru, what begins as an exciting personal journey unfolds into a look at the disparate world of the poor, indigenous, and ostracized and those who exploit them, and the injustices that ultimately ignited the passion that defined Che Guevara’s future as leader of political revolution in Cuba.

The film, a biopic of the written memoir of the same name based on Guevara’s travels, is directed by Walter Salles. It features stunning cinematography and a scenic look at the South American countryside, as well as insightful and understated commentary on the complicated historical and socio-political landscape of Latin America. It’s a tale of self-discovery, adventure, and embracing the unplanned that urges you to think deeply and question what drives you.

Let the world change you, and you can change the world.
-Ernesto Che Guevara

The Way is a story about a man determined to walk the road to Santiago de Compostela, a famous 800km trek on the northwest coast of Spain known as the Camino de Santiago, following the death of his adult son. At first American Thomas Avery’s trip overseas is to collect his son’s body, who was killed in a storm while walking the Camino de Santiago himself, but grief drives him to walk the same route as his son while carrying his ashes in an emotional homage to their relationship.

Along the way, Tom meets other eclectic pilgrims of diverse backgrounds walking the Camino, and together their experiences bring them closer to greater meaning in their lives. The film is a powerful story of family, relationships, and the quest for greater truths through journeys in the unknown.

Into the Wild tells the mostly true story of Christopher McCandless, a man who turned his back on conventional society in search of adventure, aesthetics, and authenticity. Based on the 1996 biography by Jon Krakauer, the film centers on McCandless, portrayed by Emile Hirsch, who was born into a wealthy family in the U.S. But instead of following his parents’ wishes to go to a prestigious school and start a profitable career, he gives his money to charity, sells his possessions, and embarks on a two-year journey of self discovery across North America and into the Alaskan wilderness.

Throughout the film, the story chronicles McCandless’ insatiable spirit and experiences under the adopted pseudonym “Alexander Supertramp.” His journey, fueled by passionate idealism and alienation from a family and world he felt betrayed him, centers on a youthful wanderlust and tale of self-examination that many identify with, leading to the rise of McCandless to a cult-idol-like status in the wake of the book and film.

However, his odyssey becomes a haunting tale when, marking the greatest adventure and ultimately his last, McCandless attempts to live for four months in an abandoned bus in the harsh and remote Alaskan outback.

Ultimate freedom. An extremist. An aesthetic voyager whose home is the road.
-Christopher McCandless

Tracks is an inspiring true story based on one woman’s 1,700 mile solo trek across the Australian desert in the late 70’s. Based on her memoir, the film chronicles the 9 months Robyn Davidson (played by Mia Wasikowska) spent navigating the harsh outback accompanied only by her faithful dog and four camels.

Driven by a deep craving for solitude and seeking recovery from life’s tragic events, Davidson leaves everything behind in favor of the unknown. Her expedition is full of danger and peril – between the brutal conditions of the desert, the threat of rabies-infected wild camels, and a myriad of other ever-present life-threatening risks, Davidson discovers the furthest depths of human emotion, introspection, and resilience in the face of a harrowing journey.

Darjeeling Limited is a beautiful film by director Wes Anderson, centered on three estranged brothers who reunite on a train trip through India. Francis, Peter, and Jack (played by Owen Wilson, Adrien Brody, and Jason Schwartzman respectively) haven’t spoken since their father’s funeral one year prior, and are all struggling with their own emotional problems – Francis, a recent motorcycle accident; Peter, the fear of becoming a father; and Jack, the pain of a breakup.

Their travels take them on a series of curious and impactful adventures, which reignites their bond and culminates in a reunion with their complicated mother in a Himalayan convent.

In Anderson’s signature cinematic style, the movie combines drama, humor, and stunning visuals to portray a powerful story of family, friendship, and spiritual self discovery set to the colorful and vibrant backdrop of India’s beautiful country and culture.

I want us to make this trip a spiritual journey where each of us seek the unknown, and we learn about it. Can we agree to that?
-Francis, The Darjeeling Limited (2007)

Copenhagen chronicles a young Canadian man’s self discovery through an adventurous search to understand the life of his Danish father and grandfather and uncover the truth behind his family’s sordid past. After being abandoned by his friends while traveling through Europe, jaded and immature William meets charming and beautiful Effy in a chance meeting in a coffee shop, who agrees to help him in his quest.

Effy, who’s only fourteen, and William, who’s twenty eight, embark together on an enterprising search through the city. An attraction builds between the two – Effy’s exuberant youth inspires William’s brooding and cynical disposition, challenging him to grow as a person and connect with another. However, when William discovers Effy’s real age after discovering the dark secrets of his family, he must come to terms with a love that can’t be, and what kind of person he truly wants to be.

I’m telling him a story about Skagen. It’s in the north of the country where the oceans meet…She pointed to right where the Baltic Sea is. It’s a very beautiful and very blue sea; the current travels west. Then she pointed to the left to the North Sea; also a very beautiful blue sea, but the current travels east. And then she pointed to the middle, and she said that… that is the perfect relationship. You can look to the left, and you can look to the right, and both seas are there, and they can meet in the middle, but they never lose themselves in each other. They’re always themselves no matter what.
-Effy, Copenhagen (2014)

Did we miss any? Tell us your favorite films about travel in the comments! 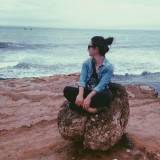